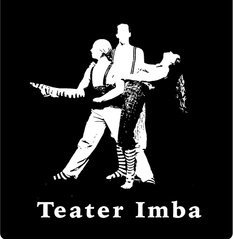 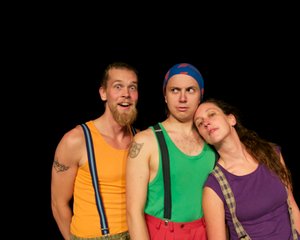 We are the creative theatre company called Teater Imba and are consistent with their members Lena Ilmarson, Christian Svensson and Thomas Häggström. We got together during an education in Linköping, where we also created our first of eight performances and we have no intention to stop any time soon!

Actor, stuntman, dancer and believe it or not, carpenter.

This creation crawled out from the darkest corner of Hälsingland and has made it through esthetical educations as The Swedish-American school of stunt and Acting and Collaborative theatre in Linköping.

One should not underestimate his physics, the ability to use everything that is thrown in his directions and taking every opportunity to fly…until he discovers gravity!

The only actress in the company. And how lucky we are to have her! There are not enough titles to describe this talent.

She was born In Norrköping before she found herself in the city of Linköping. She has been a teacher since the big fire of Rome and has made every lecture to a performance.

She has been an active member of the Theatre Company Laikos since 1999 and been arranging and participated in children’s festivals and performances. She also went to Acting and Collaborative Theatre in Linköping.

Another actor, but also clown and fire performer. Dances when no one sees.

This comic relief was born and raised in Sundsvall and was in to theatre before he was able to tajk pjopaly. He has been a member and teacher of Kvartersteatern and also went to the esthetical education in high school. Where physique have failed Thomas he was instead born with a rubber face and also knows how to joggle. Look at that!